As the time approaches to begin our next IVF cycle, the many familiar feelings that come along with IVF are resurfacing… although lately, I’ve been remembering some of the funny occurrences during our past cycles. If you are lucky enough to be able to find humor even in the worst of situations, you should be extremely grateful. While the road to getting pregnant was anything but easy, every once in a while something would happen that was absolutely hilarious and the clouds would clear for a moment. I’m sharing one of those funny times and giving yet another perspective of things that couples who struggle with fertility may go through.

One of the funniest times was when we began treatment for acupuncture at our Chinese Doctor. From the first time we went to see him, I knew it was going to be a big turning point in our journey. It was the first time we were able to joke and laugh and have positive feelings about going to a doctor of any kind. He gave us hope and something to look forward to.

The initial visit was a consultation where the Doctor analyzed all of our previous medical records, IUI files, blood work, and did a full TCM analysis. My consultation was first and it was pretty standard—exactly what I expected. I received my acupuncture treatment and waited for my husband to arrive for his consultation and treatment.

When my husband arrived, we both went into the room with the Doctor, who had my husband lie on the bed as I had and proceeded to do his TCM analysis. I sat in the chair in the corner which faced the bed so my husband and I could see each other.

“Ok, undo your pants,” the Doctor said very nonchalant with his prominent Chinese accent as I watched him take out a thermometer, which was something he had not used during my consultation.

My husband looked a little confused but proceeded to unbuckle his belt and unzip his pants. He had not yet seen the thermometer. I felt a twinge of anxiety as I wondered where the Doctor was intending on using the thermometer since he had also just asked him to undo his pants.

“More,” the Doctor commanded. “Pull them right above your knee,” as he tugged at the pants lower on the leg.

“Oh…ok,” my husband responded, now fully aware that the pants needed to practically come off.

‘Oh great,’ I thought to myself, ‘he is going to take a rectal temperature?! Why?! My husband is definitely NOT gonna go for that.’ I envisioned what was going to happen next… My husband was going to refuse the rectal temperature and get up to leave. I wanted this to work so badly and knew the many benefits of fertility acupuncture when both partners did it together. My heart sank as I accepted the fact that it would just have to be me getting the acupuncture.

To my surprise, my husband pulled the pants down to his knees, still laying quietly on the bed and still looking very reluctant.

“The temperature of the scrotum is very important for sperm quality,” explained the Doctor as he lifted up the bottom portion of the left leg of my husband’s briefs and placed the tissue on the leg with the thermometer touching only the left ball.

I realized I had tension in my chest, so took a deep breath and shrugged my shoulders to relax in my chair. I was relieved to know the Doctor would not be needing a rectal temperature!

When the thermometer beeped the Doctor picked it up to look at it. “Too hot. Ball is too hot,” he mumbled with dismay and wrote down the temperature on the file.

This was definitely something new that I had never seen or even thought about before. I was very intrigued so I inquired further: “Doctor, what does it mean if the ball is too hot?”

My husband and I exchanged looks, both of us had just learned something about fertility that neither one of us had considered before. And whether it was true or not, we were at a point where we were willing to try anything and everything the Doctor suggested.

Doctor proceeded to take the temperature of the right ball, which also was “too hot” for his liking.

After scribbling some notes on his file, the Doctor said, “First symptom to treat is internal body temperature. To help the ball temperature is a simple solution.” He walked over to stand over my husband again.

“The ball must come off the leg. You have to separate them,” and motioned with his finger in a horizontal line on the front of my husband’s briefs, “you just cut an opening right here.”

I was a little confused. “I’m sorry… What do you mean, Doctor?”

My husband’s face was once again a combination of alarm and confusion as he laid there looking down at where the Doctor was referring to.

Neither one of us were prepared for what came next…

“I’ll show you,” the Doctor said as he turned around to get something out of one of his counter drawers, both of us staring and waiting intently for what he was going to bring out.

“Like this,” he said as he pulled out and held up a pair of boxer briefs with a horizontal slit cut across the place where the scrotum would go.

As it dawned on me that he wanted us to cut my husband’s underwear and have him walk around with his balls outside of his briefs, I nearly lost it. I could not even look at my husband for fear that I would burst out laughing and not be able to compose myself. It took everything humanly possible in my entire being not to start laughing. I’m still not sure what my husband’s face looked like because I couldn’t look at him.

The Doctor continued in great detail how to cut the right place and to pull the balls outside the hole. Neither one of us asked any questions… I couldn’t open my mouth because I was dying of internal hysterical laughter, and I think my husband was still not quite comprehending what he was going to have to do… which made it even funnier for me.

The Doctor then proceeded to perform the acupuncture and left the room.

“Seriously????!” my husband laughed as soon as the door closed.

I burst out laughing and we both joked about how funny it was.

Later that night I went to work on a single pair of underwear. I only did one because I didn’t know if the slit was going to be in the right place until he wore them for work the next day. The pair I had chosen were a little loose fitting, slippery/silky brief like what doctor had showed us. I cut a fairly good size slit and set them there with the rest of my husband’s work clothes for the morning.

“This isn’t going to work!” He exclaimed. “I am walking around all day having to adjust myself because my entire stuff is falling out of the hole!”

I completely lost it—hysterical could not describe my state. I imagined my husband walking around the office having this issue and it was seriously the most funny thing ever.

“I’m calling you from the bathroom right now because I came to pee and I opened my fly and everything was out! I couldn’t stand there and pee like that! What if someone walks in and my balls are out?! So I had to come in the stall and pee in here.”

I could barely talk because I was laughing so hard as I pictured my husband in this predicament. As I tried to compose myself I managed to say, “Well we can try it with a smaller hole and different pair.”

“Yeah, well we’re gonna have to because this doesn’t work. People are looking at me all day because I’m walking around grabbing my junk.”

Obviously, after that I became an expert on how to cut a proper ball slit. Turns out the secret is to use the tighter, cotton briefs and to figure out the exact spot to cut the hole while he’s wearing them by marking the place and then cut when he takes them off.

Soon after, every single pair of my husband’s underwear had these holes cut in them and this situation continued for about 6 months, up until we did our egg retrieval. We had a very successful egg retrieval which yielded many good quality embryos, and whether or not this method contributed to the successful outcome or not, it did provide us many laughs with our friends and funny memories to help brighten a dark time. 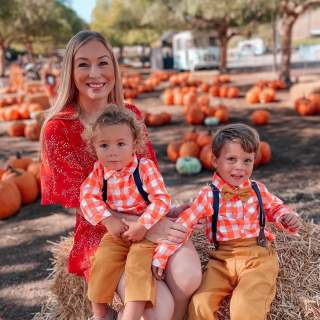 Proud mommy and wife, busy adoring and raising our sons Enzo & Vincent. Lover of all things food and Pilates. Lifelong Alaskan, living in California. Over here IVF’ing our way to 4 kids and sharing mommy things.